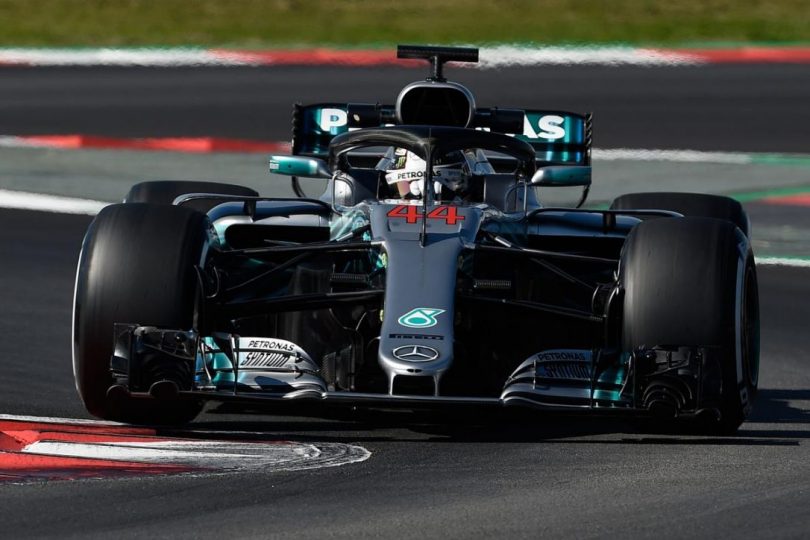 This article originally appeared in Toronto Star Wheels on March 16, 2018

Gerald Donaldson of Toronto is our country’s foremost expert on Formula One. He is the author of more than two dozen books on the subject, from biographies of Gilles Villeneuve and James Hunt to the definitive history of Team McLaren. You can read his articles daily at http://www.f1speedwriter.com/

Gerald Donaldson
www.f1speedwriter.com
Articles and posts from the Formula 1 world by one of its most acclaimed journalists and biographers. Gerald Donaldson’s F1Speedwriter blog is accompanied by his Twitter presence @F1speedreader.

We are a week away from the start of the 2018 F1 season, which will get under way Friday, March 23 in Australia (TSN has got it all, once again) and the circus will make its annual stop in Canada in June.

Recently, I met up with “Gerry” for our annual pre-season brunch, and our chat centred on four subjects: the cockpit protection device called the halo, Lewis Hamilton, Ferrari, and the sad state of McLaren.

Norris McDonald: Drivers and fans are not happy with the halo. Confirm or deny?

Gord Donaldson: It’s an issue. The drivers can’t see properly. When they pass through Au Rouge (the famous kink at the Spa-Francorchamps circuit in Belgium), the road is almost straight up. The drivers wont be able to see the top because the halo is in the way, so it could be a danger.

And during pre-season testing, some of the drivers actually tore their uniforms getting in and out of the cockpit. In a serious accident, of course, extraction — fast extraction — is critical to protect the drivers.

What’s really upsetting F1 purists, though, is that the halo is ugly. You can’t see the driver’s helmet and you can’t see them doing anything in the cockpit. What really points out the deficiencies of the halo is what IndyCar has done with the wonderful jet-fighter canopies that they’re testing. They look fast; they’re esthetically pleasing.

NM. Would F1 ever take anything from IndyCar?

GD. One of the attractions of the new motorsport audience is they have power — they can speak out on electronic media. Fans are already comparing the canopy vs. the ugly halo and they are making a big fuss about it. It could change because of public pressure. The new owners of F1, Liberty Media, are very sensitive to this type of criticism.

NM. Is anybody going to be able to beat Lewis Hamilton?

GD. Here and now, nobody can beat Lewis. Mercedes are not going to go backwards. They put in more mileage during pre-season testing than anybody, gathering data and moving forward. Lewis is faster than his teammate.

All we can hope for, if we like competition, is for Ferrari with Sebastian Vettel and Red Bull with Max Verstappen and Daniel Ricciardo to rise to the challenge. Those two teams look fast. We can only hope that they can occasionally beat Mercedes, as they did last year, but it still looks like Lewis Hamilton in a Mercedes will win the championship.

NM. Lewis is marvellous for the sport, right?

GD. He’s done more for Formula One than any driver in history because of social media. He’s reaching more people. Even though the TV numbers dropped off a bit last year, there are more people interested than ever before because more people are aware of F1.

Lewis is a wonderful spokesperson for the sport, a character and a modern guy. He whizzes all around the world in his Bombardier jet.

NM: He doesn’t seem to spend much time in the gym. As you said, he’s a jet-setter and yet he’s in as good shape as anybody.

GD: Well, he’s got a big estate in Oregon, up in the mountains, and he loves snowmobiling there. He goes water skiing and paragliding. He keeps himself in shape; he’s very fit.

NM: Canada’s own Sergio Marchionne, who runs Ferrari now, is doing what Ferrari has traditionally done and is threatening to quit if the marque doesn’t get its way. Is he serious?

GD: He’s following an ancient formula started by Enzo Ferrari in 1950 when modern Formula One got going. Enzo threatened to quit every two or three years if he didn’t get his way. Formula One always capitulated because they need Ferrari in F1 and Ferrari needs F1 — that’s how they sold their cars.

There’s a new engine formula coming in 2020. The jury’s still out on what’s coming but that’s why he’s lobbing those grenades into the mix. He doesn’t want Ferrari to lose its superiority, because one of the things they’re talking about is cheaper engines; levelling the playing field. Nobody in F1 wants that. In fact, most of the other team managers are on his side. They want to keep the status quo because they’re up front.

The engine units are very powerful hybrids. They have adopted a lot of the road-car technology. But they are muted and they lack drama. That’s what has Marchionne and others upset. But we have to remember that these engine suppliers are car manufacturers. They are leading the hybrid engine approach.

The manufacturers are in F1 now, so they can test the engines and they can publicize them if they do well. I think they are going to lead the way in the future if they stay in F1.

But I’m not so sure the purists have all that much to worry about, anyway A lot of people don’t think electric engines, for instance, will ever really happen in a big way.

NM: McLaren is showing indications of once again being a joke. This started happening when Ron Dennis was forced out of the company. Ever since, McLaren has been lost. What do they have to do?

GD: It’s embarrassing for a team that was on top of the world for so long to first have to suffer through that partnership with Honda, which was a disaster. The engines were slow and unreliable.

So, what happened is that McLaren dumped Honda, Honda went to Toro Rosso — where it seems to be doing much better — and McLaren got Renault engines. Guess what? Nothing has changed. McLaren is notoriously unreliable again. Their drivers, Fernando Alonso and Stoffel Vandoorne, did less mileage this pre-season than anyone else. The problems aren’t with the engines but with McLaren.

You’re right, Norris. All this started when Dennis was dumped. They have to look within themselves to get out of this mess.