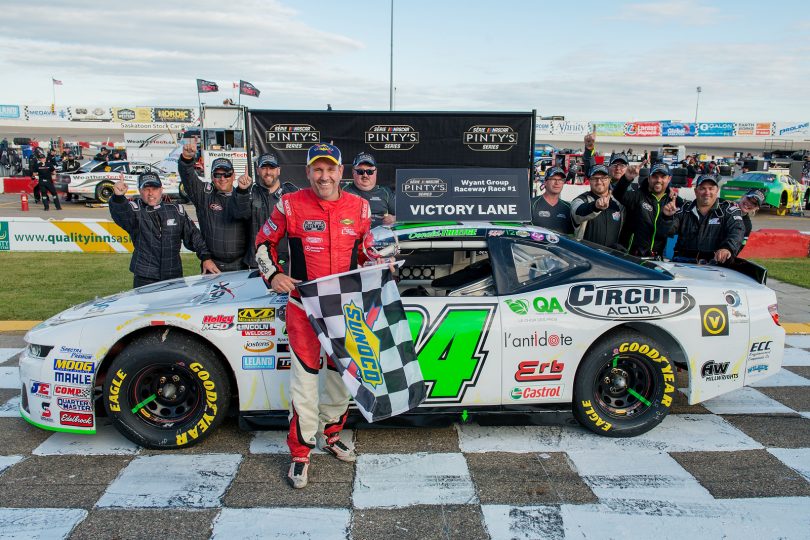 Boy, we have a ton of motorsport news and information to get to heading into the July 27-29 weekend, so let’s get at it:

F1 and IndyCar will both be in action, with the Grand Prix cars racing in Hungary and the Indy cars on the road course at Mid-Ohio.  The NASCAR Pinty’s Series, which raced a double-header in Saskatoon on Wednesday night, wraps up its western swing in Edmonton Saturday night. Meantime, one of its occasional runners, Pete Shepherd III of Brampton, will get his first Xfinity Series start at Iowa Saturday.

And BARC, the British Auto Racing Club, is hosting the fourth event in the 2018 CASC-OR Race Ontario Championship at Canadian Tire Motorsport Park. And they have a surprise in store for spectators on Sunday afternoon.

But first, I have to take you back nearly two weeks, to the Honda Indy Toronto and, specifically, the first of two Pro Mazda races. Anybody who was there, and paying attention, saw one of the most spectacular racing accidents they will ever see – and the victim, a young driver from Britain named Harrison Scott, got out of the whole thing with a scrape on a knuckle.

When something like that happens, the best thing a race driver can do is to get back on the horse, to get out there again as soon as possible. 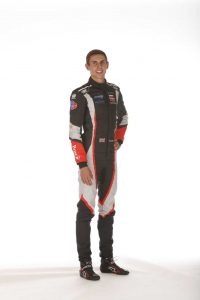 That crash happened on the first lap of the first race on Saturday of the Honda Indy weekend and the RP Motorsport  team did a terrific job getting the car ready for Race Two on the Sunday. But the car had been pretty badly bashed around in the crash and when Scott hit the brakes going into Corner One on Sunday, the suspension collapsed, putting an end to his race.

He’ll get his next chance soon. He’s not at Mid-Ohio this weekend because of a scheduling conflict but will be back for the next race.

Scott started in motocross when he was seven, switched to karts at age 10 and went car racing when he turned 17. He’s 22 now and aiming for the top on the Road to Indy after winning in Europe but finding his way to Formula One compromised by a lack of opportunity.

“Europe is very difficult at the moment (for an ambitious racing driver),” he told me in an interview. “To  get to the pinnacle – even to remain on the ladder of F4, F3, F2 and then F1 – is impossible because the cost is so high. Trying to get sponsors is very difficult and the prizes you get for winning are not nearly  enough to push you up to the next level.

“When I won the Euro F3 Open last year, I got nothing for it. I got nothing. A bit of recognition, and a trophy that I can tell my grandchildren about, but that’s it. For me to make that jump to say, F2, which is the next step, is impossible.

“I have been very fortunate. When I moved from karts to cars, I picked up a sponsor who has funded my car racing career for my first four or five years. I joined RP Racing last year and we went on a great journey together, winning 12 of 14 races together and the F3 championship and they wanted to stay with me and decided America is a great investment for them and a great opportunity not just for me but for them, too. So we made the jump together.” 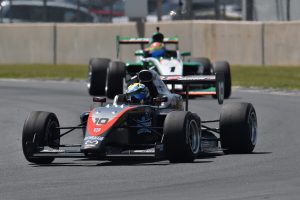 Scott said that, as of Toronto, they’d done five rounds of the championship – 10 races. “We were a new team to the category, so we had no information , no data, no knowledge of any circuit. We picked up two wins, five podiums and could have had a couple of more wins if it wasn’t for little gremlins that we’ve had. It’s been a really good start to the year. We were on the up until yesterday, which was a big shock.”

The big shock was being launched over another car, landing upside down, and crashing into a tire barrier at the end of an escape road at Corner 3 at the end of the Lake Shore Blvd.

Said Scott: “In 10 or 11 years of being involved in motorsport, I‘ve never rolled, I’ve never flipped. I’ve never had a big scary crash until yesterday and it was a big eye-opener.”

According to Scott – who’s very tall, by the way, about 6-foot-2  this is what happened:

“We were braking for Corner 3. I was being overtaken and the guy passing me pushed me toward the inside wall and he pushed me to where I had nowhere to go. The wall was on my right and he was on my left and there was nowhere to go. I went up over his back wheel and that was it. I was just a passenger.

“I can remember everything right from the moment it started to happen. I can remember going up in the air, getting airborne, and I can remember flipping and getting upside down, seeing the ground beneath me and I came down head first with the car on top of me. I then slid to a stop against the tire barriers, upside down.

“I have to give a big thank you to Tatuus, which make the monocoque.  If it hadn’t have been for their high standards and the strength of it, I wouldn’t have come out of it as well as I did. And my crew for strapping me in as tightly as they did.”

Scott joked that his girlfriend had flown in to Toronto and was watching him race in North America for the first time. “I’m afraid I’ve probably scarred her for life,” he quipped, adding that he didn’t expect she’d be around to watch many more.

Scott said all he wanted to do was get back in the car and go racing.

“I just want to get out there and get going and get over it,” he said. “Being in motorsports, you have many more downs than you do ups so overcoming a hurdle like this is part of the game. It’s something you have to handle; you have a down moment and you have to pick yourself up.

“I’m a pretty strong guy. I have a pretty strong character and it (the crash) hasn’t phased me one bit. And want to get back out there and get me and the team the podium we deserve.”

Moving right along, the NASCAR Pinty’s Series raced a double-header at Wyant Group Raceway outside Saskatoon Wednesday night and when the Twin 125s sponsored by Bayer CropScience were checkered, the series had two first-time winners.

In the opener, it took Donald Theetge all of 16 laps to get the lead from pole sitter Kevin Lacroix. After that, it was smooth sailing for the driver from Boischatel, Que. (see photo at top of column), who held off challenges from Cole Powell, Alex Tagliani and Marc-Antoine Camirand to finally claim his long awaited first victory.

D.J. Kennington completing the top five, followed by Lacroix and Mark Dilley. Joey McColm scored his first top-10 finish since 2015, in eighth, while Noel Dowler and Josten’s Rookie of the Year candidate Brett Taylor rounded out the top 10.

In the nightcap, Powell, of Mount Brydges, Ont., became the first non-Quebec driver to score a victory in the Pinty’s Series since Cayden Lapcevich won the Pinty’s Fall Brawl at Jukasa Motor Speedway in 2017. L,P, Dumoulin held on to finish second while Camirand was third. Theetge and Kennington completed the top five. Tagliani was sixth, followed by Lacroix, Mark Dilley, Dowler and Andrew Ranger.

The NASCAR Pinty’s Series will continue the western tour when it visits Edmonton International Raceway for the LUXXUR 300 presented by Bayer on Saturday.

Meantime, part-time Pinty’s Series racer Shepherd will make his NASCAR Xfinity Series debut for JP Motorsports this weekend at Iowa Speedway in the U.S. Cellular 250 Presented by The Rasmussen Group.

It will mark Shepherd’s first run on the Iowa oval since 2006 when he ran the USAC Silver Crown Series event for Carl Edwards/RE Technologies Racing, finishing third. .

“The opportunity arose when Michael from JP Motorsports contacted me Sunday while my wife and I were watching the Cup race on TV,” Shepherd said. “The seat was open and it was an opportunity that I was more than happy to accept.”

Shepherd will be running the No. 55 National Exhaust/ Connell Construction/driven4communications Toyota for team owners Jerry and Phyllis Hattaway.

“I can’t thank Jerry Hattaway enough for this opportunity,” Shepherd added. “He has made this whole process seamless and I can’t wait to get in the car for Friday’s practice.  The goal for this weekend is to get more laps under my belt and to maximize points for the 55 team.  I have always run limited schedules and I took a few years off of racing, so I want to get as much seat time as possible this year.”

The Green flag will drop at 5 p.m. Saturday and the race will be available on TSN.

In addition, BARC is putting on a special race for the Lubrico V8 Trophy.  The trophy will be awarded to the winner of a special 30-minute race Sunday afternoon that will be open to V8-powered cars that are entered in other classes during the weekend.

Formula One – Friday practice, 8:45 a.m. on TSN2; qualifying Saturday at 8:55 a.m. on TSN and the race Sunday at 9:05 a.m . on TSN. Can Vettel get his season back on track? Will Hamilton`s rabbit foot continue to deliver its magic? Will Lance Stroll . . . well, who knows what’s happening with Lance Stroll? Whatever, it will all be there on TSN.

IndyCar – Scott Dixon will be making his 300th career start as an Indy car driver. Can he win the race? Find out Sunday at 3 p.m. on Sportsnet360 and Sportsnet 1